A few days ago, a private collector contacted me to identify for him the text on some vellum folios he acquired from Ethiopia. The pages are from a classical Ethiopic translation of the gospels - a bound codex at some point. Here’s an image from one of the folios -- the text is Matthew 17:1-3. The scribal hand is quite clear, but for greater clarity, I’ve transliterated and transcribed it below: 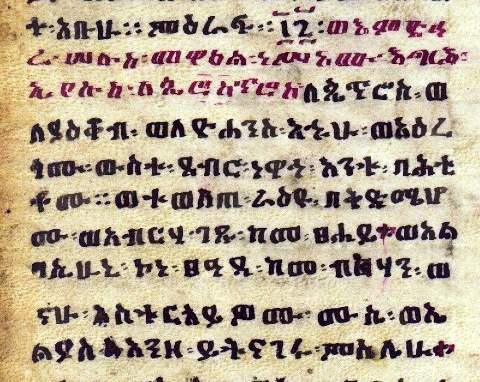 27.1: The Preposition «ba-» (by, with, in) has several important functions. Much like the preposition «la-» (of, to, for) [see: 12.6], this preposition has a distinct set of pronominal suffixes:

27.2: The negative particle with this preposition is the enclitic አል «al-»,  thus forming: አልቦሙ (albomu = not in them) አልብነ (albəna = not in us) etc.

27.3: The most important function of this preposition is that (with the 3rd m. sing. suffix) it indicates existence (there is…, there are…), just like the particle yeš in Hebrew, īt in Aramaic and thamma in Arabic. The following noun may sometimes decline in the accusative.

ቦ፡ቤት፡በዘሀገር።
bo bet ba-za-hagar
There is a house in this city.

ቦ፡ዘረከበኒ፡ወባሕቱ፡ኢዜነወ፡ሊተ፡ስሞ።
bo za-rakabani wabāḥəttu i-zenawa lita semo
There is someone who found me but he did not tell me his name.

አልቦ፡ዘሰምዐ፡ቃላቶሙ፡አመ፡ቦኡ፡ሀገረ።
albo za-samʿa qālātomu ama boʾu hagara
There was no one who heard their voices when they entered the city.

27.5: Another very common function of this preposition is that it indicates possession. The possessed object is usually declined in the accusative case, like the object of a verb.

26.1: Most verbs take on a causative sense when the suffix << አ >> (a-) is added to them. This sense includes causing directly, ordering, permitting, suggesting etc.  This suffix can give a causative sense to any of the verbal bases, producing Bc, Dc, Lc, Qc.

Note in the Bc construction the medial vowel disappears, so: ወደቀ (wadaqa – he fell) becomes አውደቀ (awdaqa– he cast down).

26.2: Note the slight phonetic change in the negation of causative verbs from “iʾa” to “iya”:

26.3: Consider the following sentences that use causative verbs:

His death saddened his family and they had him buried where he died.

The king destroyed the city and ordered all its inhabitants killed, and he imposed a tax on the land he conquered.

Our Lord settled Abraham in Egypt and he caused him to acquire great progeny and wealth.

I announced the words of our prophet to the residents of the city but they did not move them to tears.

All the translations that he has ordered written, we set on fire. 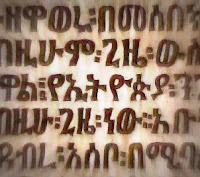